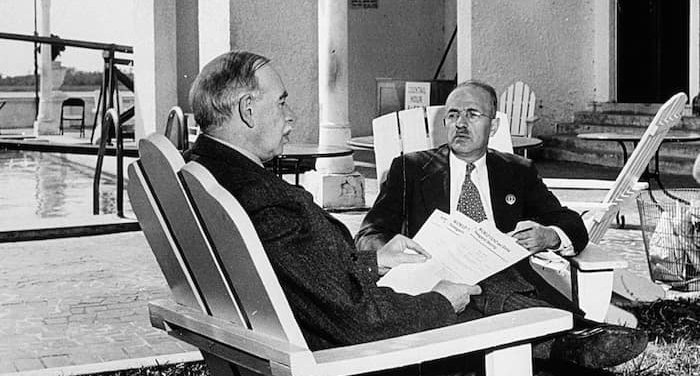 The following conversation is based on the genuine point of view of John Maynard Keynes and about the ignorance about History that seems to pervade our leadership.

Hi Emanuele, she has gone to see the backstage of a ballet , you know her old passion, but tell me what’s up in this century, I feel myself disoriented.

You remember your words John?

« The game of professional investment is intolerably boring and over-exacting to anyone who is entirely exempt from the gambling instinct; whilst he who has it must pay to this propensity the appropriate toll. »

Well profit and cash are the kings now, few are re-investing and we suffered a structural crisis of the system and unemployment rates, even worse than the Great Depression one.

Gosh Emanuele, I predicted it, was inevitable when you rely on a mass market economic system.

Correct, John but the problem is that USA and even Japan now are rallying on Miltontheory 1.

OMG, to think that I wanted to introduce again a monetary system based on gold!

:DDD John, sorry but it’s really hilarious, I remember again when you told,

«Unemployment develops […] because people want the moon; (or Mars now)—men cannot be employed when the object of desire (i.e. money) is something which cannot be produced and the demand for which cannot be readily choked off. There is no remedy but to persuade the public that green cheese is practically the same thing and to have a green cheese factory (i.e. a central bank) under public control.»

The Federal Banks are mainly or totally private now!

My dear, you’re well informed, but you’d know also in the case what I told to the people who criticize me on the applicability of my models in the long term, … « In the long run we are all dead. »2 … but taste your tea now or you’ll miss the fragrance of these leaves that a friend from the India Office sent me.

Really sweet-smelling and delicate John, send my compliments to him, also these biscuits are delicious, and can let me forgive for a while the bitter taste of a world without ideals and ideas, it’s a sort of frustration sometime.

Ideas shape the course of History Emanuele, don’t be discouraged and too much practical, remember:

«Practical men, who believe themselves to be quite exempt from any intellectual influences, are usually the slaves of some defunct economist. Madmen in authority, who hear voices in the air, are distilling their frenzy from some academic scribbler of a few years back.»

Let fly the soul of the genius who’s in every human kind, learn how to inspire happiness and we’ll do rest, by the way we’re not lived for nothing.

You’re right John, at the end this crisis is simply caused to the fact that the Capitalism has reached his scope and goal, we are in the most of the case, or we could, when we would, in abundance of products, and this system need to be re-engineered; Many people of good will and sense is talking about the sharing economy, new models to intend the productivity, in a few words how to be happy, therefore we’re still on time to build a better world when we’ll win.

Emanuele, A study of the history of opinion is a necessary preliminary to the emancipation of the mind, and never forget that nothing matter except states of mind, chiefly our own.

Thanks John, rest in peace, I’ll mind out, and forward my regards also to Cicerone as soon as you meet him, I’ve made one of his motto as mine,<<Historia vero testis temporum, lux veritatis, vita memoriae, magistra vitae, nuntia vetustatis>>(Cicerone, De Oratore, II, 9, 36)

OK Emanuele but we’ve another sort of intending the time and the economy here, but you’re not ready for that, never mind, I’ll do it, take care my friend!

The greatest economic thinker of the 20th century, Keynes (a Liberal incidentally) challenged fundamentally the idea that market economies will automatically adjust to create full employment. After working at the Treasury during World War I, he was its chief representative at the post-war Paris peace conference, but resigned in protest at the harshness of the planned reparations. In the Twenties he developed radical plans for dealing with unemployment through deficit financing and state intervention. His insistence on the central role that uncertainty plays in economic decisions foreshadows much of the current interest in behavioural economics. While his basic economic framework – in which short-term economic growth (and employment) depends on ‘aggregate demand’ (consumption, investment and net exports) is built into many of our forecasting models today. Later on, he participated in the Bretton Woods conference (which looked at how to establish a post-war monetary system that would avoid further economic crises) that led to the creation of the International Monetary Fund and the World Bank. Admittedly, he went out of fashion in recent decades when inflation was a bigger worry than unemployment. However, the present crisis has led to something of a revival in Keynesian thinking, and his insights into how international imbalances should be tackled remain highly relevant.

Images in this post are considered to be in the public domain since found on the web and media therefore supposed to be copyright-free images – it’s not intended from the author of the post to violate any copyright right infringement laws, or to offend anyone; in the case you advise a violation, would you advise me and I’ll promptly remove them. The post it’s also an expression of my personal opinion, and do not intend as well to have any commercial purpose.

Ethics, sustainability, trust, are parts of social capital, and social capital matters in financial markets. Investors consider not only the information they receive but also their trust in the accuracy of the information and the fairness of the markets in which to trade. Emanuele Bertoli, has made BerBrand one of the most innovative companies in Europe investing in these added values. BerBrand which core business remain the fashion industry is now investing in top innovative and sustainable companies, among that the brand and the future social community of conscious consumers . His philanthropic activity recently comprehend the recovery of the Ancient Castle of Padernello in Italy surrounded by a rural territory who’s promoting slow food activities and cultural events. View all posts by Emanuele Bertoli